There are many theoretical models through which images might be read and interpreted. Generally, two dominant models are discussed: the realist and the constructivist model.

For the following section you may wish to read individually or with other people and develop your discussion. Going through this section is important for being able to conduct the upcoming exercises.

Realist model: according to this model an image could be universal – it can have the same meaning at different times and places – and therefore is a trace of something real.

For example: Think of a cow. 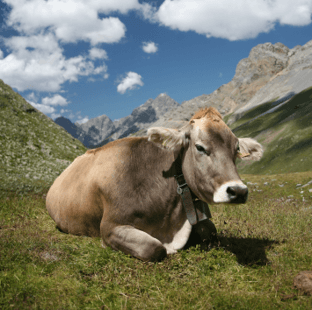 One can argue that the image shows (represents) a cow as it naturally appears. Therefore, there is a universal understanding of what is a cow; that anywhere and anytime, the viewer can identify the image as an image of a cow. In other words, whatever the image intends to show is what the viewer sees.

By looking at the picture ask yourself: what do you see when you look at this image? What is being depicted? Where is the picture taken? Is there any room for interpretation and difference in perception?

The picture does not seem to provide any social context. However, we might read the image as depicting serenity and pristine nature in an alpine background. This could be interpreted as the meaning of the image. Do you find the realist model (see definition above) satisfactory or unsatisfactory? Why?

Conventionalist/constructivist model: According to this model, with an image we express social norms and values. Therefore, images show things in particular ways and are a way of transmitting our cultural and social norms (even in the image above). One might say that images convey different things to different people (cultures), and that what the photographer, in this case, aimed to show can be interpreted differently. Therefore, viewers/audience, people represented, artists, marketing agencies, corporations, editors, etc., all take part in giving meaning to images. 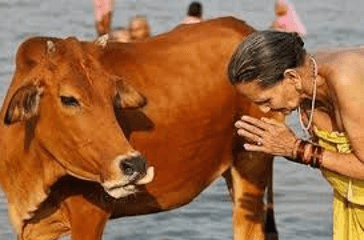 In the image above we see a cow, again. However, this time additional context is provided. The context also is different and therefore affects our readings.

One might comment by referring to Hindu religion, which considers cows as sacred, a symbol of the Earth and life, and therefore people show respect and veneration towards them. 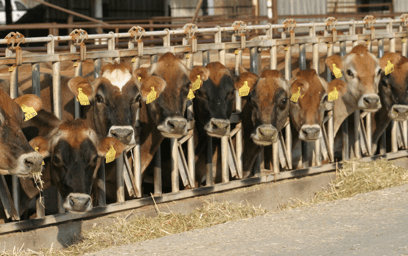 The image above shows cows in an industrial setting. For some the image refers to the fact that we use cows as food, but for others it expresses animal cruelty and abuse. For example, vegetarians value the lives of animals equally to those of humans and are against the mass production of animal products. Another analysis might refer to the technological, medical, and economic developments that have driven the rapid growth of populations and have created the demand and possibility for the mass production of meat. However, animal rights activist and environmentalists criticize these developments. They have pointed to damages caused on the environment (CO2 released by cattle and need for grazing, transportation, storage, etc.), the inhumane treatment of animals, as well the health risks (overuse of antibiotics in cattle, overfeeding, etc.).

This example illustrates how changes in social values and norms shape our readings of images and that they are not uniform (one groups may see it as part of advancement and development while the other sees degradation of environment and a health risk). Also, the ways we “see” is specific to our culture, history, geography, as well as our political beliefs.

If we think of culture as shared meanings, and society as shared relationships, images reflect those meanings and relationships. In other words, we read and “see” through our shared understandings. For example, one might think of culture as a pair of glasses we wear, through which we see the world around us in particular ways.  The position we are looking from is also important.