You can workshop this exercise alone or in a group. If you are a larger group, 6 people or more, you can split into two groups. Alternatively, you can first workshop the first word and then the second, or conduct the exercise alone.

The participants state what comes to mind when one says ‘belief’, ‘science’ and ‘truth.’ One person fills in the cells (see table below) with responses given by participants. You can give as many definitions/descriptions that come to mind.

You can also choose one person to be a moderator. The moderator explains the rules, keeps notes, and helps the participants to compare and discuss. They are also responsible for making sure that all participants have an opportunity to speak and give turns to the participants.

As a group you can then discuss the differences and similarities between the three.

Below are some suggested definitions.

Science: the intellectual and practical activity encompassing the systematic study of the structure and behavior of the physical and natural world through observation and experiment.

Belief: an acceptance, trust, faith, and confidence that a statement or something is true or real.

Truth: a fact or belief that is accepted as true.

One example to consider is the difference in explanation – between creationist theory and the big bang theory – regarding the creation of the universe and life on earth. 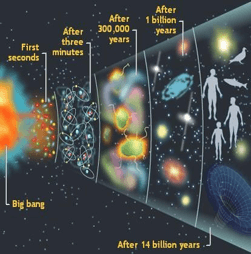 Representation of a broad timeline of the universe according to bing-bang theory.

Big bang theory – states that the universe came about through a cataclysmic event, and is based in the observed (scientific) expansion of the universe, cosmic background radiation, abundance of the elements, and the laws of physics. 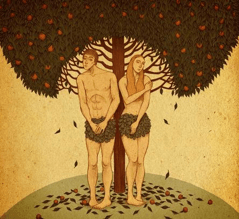 Representation of Adam and Eve.

Creationism – states that the Universe came about through divine intervention.